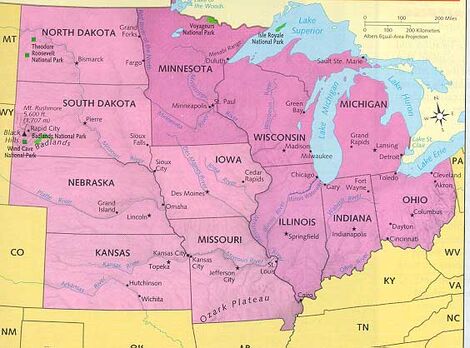 Well known for its agricultural productivity, this region includes the "Corn Belt", the Middle West encompasses several states throughout the Great lakes region as well as the Dakotas, Nebraska, Kansas, Missouri, and Iowa. The region is home to a diverse range of industries, recreational opportunites, and cultures. The Middle West has an active tourist industry as well as a rich history that includes dairying practices, changes in farming culture, brewing traditions, and early settlers in the Virginia Military District. Detroit and Chicago, two of the largest cities in the region, have experienced unique growth patterns and, recently, urban renewal.

Sport fishing - fishing for fun - began in ancient times. Man first caught fish for food, than made sport of it. Approximately 25 million fishing licenses are sold annually in the United States, and an estimated 15 million additional anglers fish where licenses are not required, as in most salt-water fishing areas. Every year anglers take some 500 million pounds of fish from fresh waters and about 600 million pounds from salt. Billions of dollars are spent on this very popular participation sport. In the United States, there are some 100,000 lakes and more than a million miles of streams and rivers for the freshwater fisherman and more than 90,000 miles of coastline on which the salt-water fisherman can try his luck. Most important is the immeasurable pleasure enjoyed by each of these millions of fishermen. The Midwest is no stranger to sport fishing. Residents of Detroit, Chicago, Milwaukee, Minneapolis, and St. Paul all have their favorite hinterlands in the north, and outdoor recreation has an overwhelming presence. There are many resorts located throughout the Midwest, especially in the Upper Great Lakes. Wisconsin has well over 1,000 resorts and can boast the invention of the outboard motor. There are many different fish located in this region, many fishing techniques, and many many fisherman. The art of sport fishing will remain as long as there are fish to catch.

Located on the southwest coast of Lake Michigan in the northeast corner of the state, Chicago is Illinois' most populated city. With over 2,800,000 people, the city is a major transportation hub with claims of the United State's busiest airport and most important railroad freight center (InfoPlease 2010, Hudson 2002, 208). The city's reputation as architecturally innovative has attracted worldwide attention. A powerful city with a resilient history, Chicago is the command center for much of the Middle West (Hudson 2002, 208).

Around 1800 settlers began moving into the Midwest, the rich farmland created an important role in building a rural economy. As the years change

the agricultural needs changed, the yields and technology increased the farm size. Today we see changes in these farms all over the Midwest the movement of the family farm to the corporate farm has created a new economy that has more influence on what Americans eat and the technology needed to farm this land. The use of corn has changed from a food to a necessity and as technology changes the uses of corn grow and grow.

The Great Lakes Basin Ecosystem and its Environmental Challenges: An Overview SaraP

Although part of a single system, the Great Lakes Basin (GLB): Superior, Michigan, Huron, Erie and Ontario, and their connecting channels form the largest fresh surface water system on earth. It also is home to over one-tenth of the United St

ates population and one-fourth the population of Canada. The area also has high concentrations of industry and agriculture. Human activity and lack of regulations, over time, has negatively affected the ecosystems of the GLB. Currently the work conducted by environmental groups, agencies, and legislation, has provided a strategy for the restoration, protection, and sustainability of the GLB

Detroit, the rise and fall of the auto industry (Sierra Slatinsky)

The Motor City, Detroit Michigan and the industry which fueled a great population boom during the first half of the 20th century. The forces that shaped this massive industry such as innovation, geographical proximity to shipping channels, cultural clusterings, and acessability to raw materials still feed industry, however, the players have changed and the rules as well.

Detroit and the Automobile Industry

After years of dairy production in Wisconsin through early settlement, California now "udderly" crushes its rivals.

American brewing traditions have greatly influenced the global beer market. Many of the world’s largest brewing conglomerates have their roots in the American Middle West. A unique combination of physical geography, immigration from New England and Germany, and easy access to global markets have allowed for breweries in this region to thrive. A legacy of brewing and a brewing culture that has remained strong despite many setbacks has positioned the Middle West as a strong leader in the future of global brewing.

In 1794 the Virginia Military District was open for settlement. Many areas of land were reserved for Virginia's Revolutionary war veterans once the war was over. This territory was bordered by the Ohio River on the south, the Little Miami River to the west, and the Scioto River on the east and north. The Virginia Military District was an approximately 4.2 million acre of land in what is now the state of Ohio that was reserved by Virginia to use as payment for veterans of the American Revolutionary War (Virginia).

Retrieved from "https://geog368u.fandom.com/wiki/Group_3?oldid=5626"
Community content is available under CC-BY-SA unless otherwise noted.